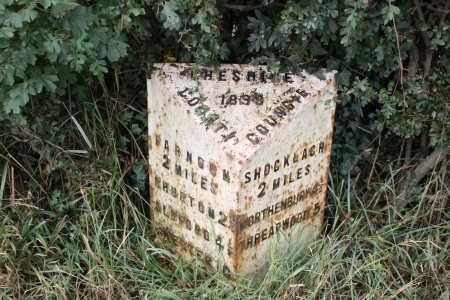 Someone has been tidying up the verges and hedges that flank the road that passes through Crewe-by-Farndon towards Worthenbury, and they have done such a good job that one of the mileposts that I went hunting for when I was writing the post about the Chester to Worthenbury turnpike (toll road) has been revealed.  And here it is!   It is in the grass verge on the west side of the road, just before Caldecott Farm.

If you want to know more about these 1898 mileposts, have a look at my post about them here.  They post-date the turnpike, which went out of service in 1877.  Turnpikes were all supposed to have mileposts, so it is probable that when Cheshire County Council was first established was formed on 1st January 1889, and when all of the local turnpikes eventually came under council control, they replaced the original ones, which were probably rather dilapidated by then, with nice shiny new ones.

Not so shiny and new now, but still hanging on in there!  It is located just short of a farm on the left heading south (the east), and is on the west side of the road about two or so metres to the right of a telegraph pole.  I will go back and get an exact What Three Words location for it next time I’m in that area, but for the time being it is roughly at ///rainfall.duplicity.proofs.