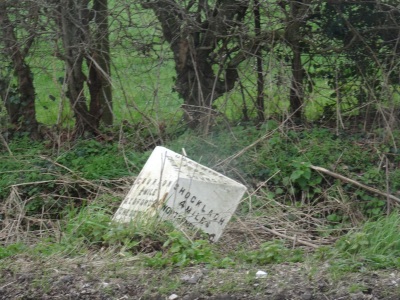 Today I was able to take a photograph of the 1898 Sibbersfield Lane milepost, just on the way out of Churton as the road heads towards Crewe-by-Farndon (which is on the other side of the bypass).  I have been taking photographs of the mileposts since I first became interested in the turnpike.

The turnpike (or tollroad) that ran from Chester to Worthenbury was marked with mileposts.  All of those surviving date to 1898, when the council was obliged to take over the turnpike.  They presumably replaced earlier ones.  I have been collecting them, digitally, for over a year now.  So many of them were completely encased in foliage and shrubs that it was impossible to verify their existence until the winter, when all the leafage died back.  I have posted about the turnpike in two parts.  The first looks at turnpikes in general, and the second looks at the Chester to Worthenbury turnpike in particular.  Another post includes photographs of the mileposts as I have located them.

Sibbersfield Lane is a very fast road, and it is not at all safe to stop, get out and take photographs, and as much as I would have liked to get some good shots, it was clearly unwise to get out of the car to risk life and limb, so these are two shots taken from the car, with my handbag camera.  I didn’t have the professional camera that I usually use, so they are a bit blurred.  The camera was, however, perfectly level, and this can be seen by the line of road and hedge.  It is the poor, sad milepost that is at a perilous angle, slowly subsiding into a ditch.  It seems, otherwise, to be in reasonable condition.  I will alert Chester West and Cheshire Council, but it seems unlikely that it will be high on their list of priorities. 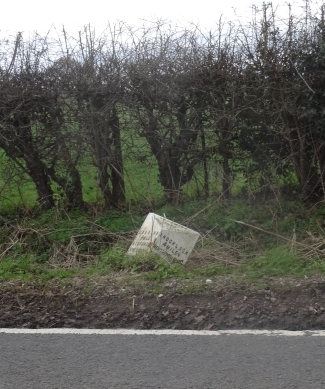